Last weekend, at Easter, the season for two-wheels officially started in Southern Sweden. Many motorcycles where out and about enjoying the first warm days and being surrounded by nice fresh air in a way that only motorcycling offers.

We spent the weekend with the family in Grythyttan. That involved changing from winter tyres to summer tyres on the two family cars, fixing the old Russian foldable bicycle that one of the young ladies found in the garage stash and of course some severe fettling with the motorcycles. It took me about three hours to get the old rusty mufflers off Elisa (you may admire the shiny new ones on the picture below). At last a metal saw was the only way out since patience and cautious working with screw driver and hammer did not loosen the tight grip rust had formed between the exhaust pipe and the old mufflers. Putting on the new mufflers was then a very simple task. Elisa also got a new Bagster tank cover, and now I am in the pursuit of a fitting tank bag and some luggage that fits the rear part of the bike. Up to now a top box was sitting there, but as you can imagine it not only destroys the nice line of the bike but is not very suitable at higher travelling speeds which may include sidewinds – unless one fancies a bit of an extra challenge. Ebay, here I come! Any advice from the dear readers of this post are of course much appreciated. It is a shame that modern luggage mostly never seems to suit older bikes.

On Easter Monday Elisa and I made the two hundred kilometres back to Norrköping where she happily arrived at the new garage. Did I mention that on Easter Sunday she started on first attempt and without any complaints whatsoever? She clearly enjoyed the first spin of the season around town, showing off her new equipment and telling everyone in her way “it is springtime and here I come again!”.

On the way back to Norrköping one could not only experience the crappy (and faaaar too fast) driving of some cars but also the fact that Elisa’s indicators decided themselves when they wanted to work – which was usually not when I wanted them to function… Yesterday therefore involved some severe checking and cleaning of contacts and now I would say we no longer pose a danger to the traffic around us. After all, mid of May it is MOT time and one really does not want to do that twice… Never mind the costs that is.

Right now this blog post gets written while in the background the Le Mans 24 hours race finished. This year it was won by team Yamaha Austria who managed to hold their first place for quite some time despite the rain in the morning and the wet race track. Congratulations to them – tell me, can the season start any better? 🙂 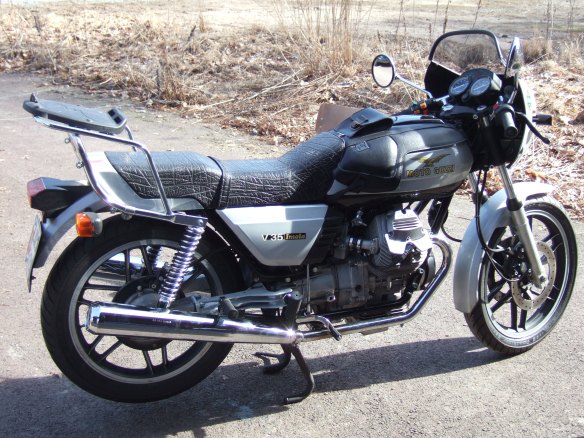