Happy Monday? Well, I dunno. Crazy? Yep, definitely. A “super Monday” it was in quite some respects. It started with snow slush on the way to work in the morning.

It continued with all sorts of strange questions in the work-inbox waiting to be answered.
On a day where you get calls like “Oh, is it not the owner of a bike that chooses a starting number? Really, the rider chooses a number?” and then on top of it an email from a work buddy at the British federation mentioning something like “Regards from a sunny bladiblah…” (sunny? England??), then you know it is one of those Mondays that you just have to survive :-D.

After all, “What can possibly go wrong?!”

Well, in the early evening back at home it was time to put on the running shoes. Not only because it was part of the plan for today, nope, by then it had become a pure necessity to get the brain cells back on track. Just a bit more than 4k it became tonight, a rather short run, but nice, despite today’s grey, cold and wet weather.

And look what I found – some small green buddies sticking their head up into the cold, Swedish pre-springtime air: 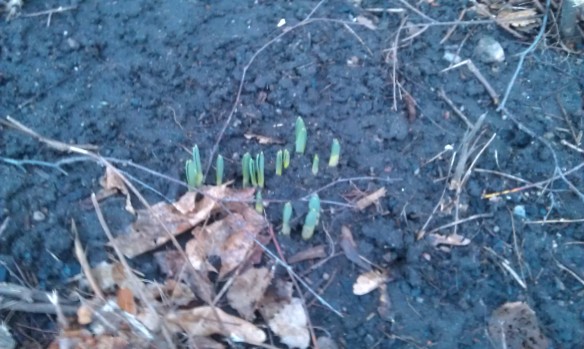 So, let’s give the week a second chance tomorrow! 😉