Midsummer – a tradition and a long weekend in Sweden after or on the 21st of June, the longest day of the year.

Originally I was supposed to travel this weekend, but life had other plans. I stayed home instead and didn’t go to the country side either, since the weather wasn’t that great (or – typical for Midsummer, in other words).

A lot of free time all of a sudden! Luxury! Lots of it spent on the Brit’s Brexit decision yesterday, but that is another story.

I started yesterday with a run around town of about 5k.
During that run I realised how similar Midsummer in Sweden is to Christmas in Sweden. Just warmer, although not necessarily. There have been years with the same temperature like 7 plus on both, Christmas Eve and Midsummer Eve. Greener, though, and definitely loads of light obviously.

Anyway, the town was empty. Silent and empty, just like after 3pm on Christmas Eve, when everybody watches Donald Duck. I saw the occasional group of family members meeting and greeting, with bags containing small gifts and definitely some beer and wine. But that was it. And the situation didn’t change much during the day. A very small amount of traffic. Few people about.
Thinking about it, during the entire eight years I  have been living in Sweden, I always spent Midsummer somewhere else. Either travelling, or with family and friends, or at least on the country side where it is quiet anyway.

So it took me eight years to realise how very similar these two feasts actually are. Apart from the amount of light and green in nature. It is even largely the same sort of food, you knew that, didn’t you?

Well, I continue enjoying my nice, quiet and relaxing long weekend in Norrköping then.

Wishing you a good one! 🙂 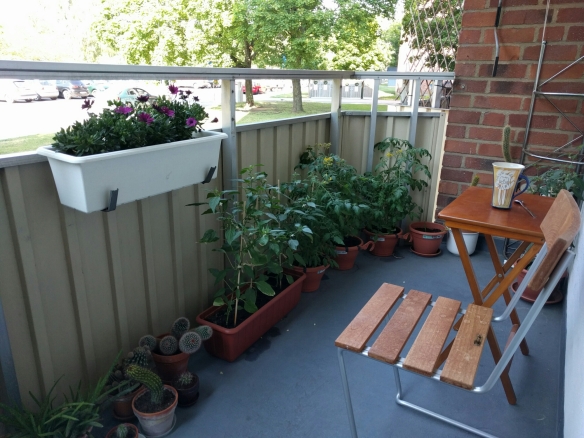 Last Friday I came back very early (2.40am) from a business trip. Despite being annoyed that travelling back took so much longer than expected, the way back home offered a new experience. Originally I wanted to sleep on the bus – but then I saw that the sun was kind of going down at one end of the horizon while already coming up again at the other end – so even here in almost South Sweden one can see something like “white nights“, at least close around midsummer. First time for me to see this since last year at this time I was out of the country. Of course sleeping on the way home was not on anymore then at all.

From Friday midday the airconditioned environments I spent most of my time in during the three previous days took their toll. Since I do not tend to go very well with air con, this trip was again one of the worse examples for that. Proper cold with fever (and that in summer… grrrrhhh) and all the usual niceties. Strictly bed for two and a half days. Today the first day up again – which consisted of watching the boyfriend moving the next batallion of boxes to the new flat and holding doors open whenever required. Not leaving the old flat that is. But being responsible for lunch catering; definitely the easier task than carrying and packing boxes, although I also packed a few for the kitchen. But that led to me being in an extreme need of a Siesta after lunch. However, the neighbours of course then decided that it would be necessary to play a bit of Death Metal…. .

So how will this be in the new flat? Well, all neighbours on our floor are all pensioners as we figured out already. The direct lady-neighbour is dependend of a rollator, the one “en face” is an older gentleman that cannot really take care of himself anymore. He needs a push chair and sometimes when coming into the entrance area one has the pleasure to notice that he was not quite able to make it to the toilet. To spare you more details at this point. The third lady-neighbour seems to be of similar age as the two others, but she is still able to take her bicycle, even if not uphills anymore.

It looks like us lowering the age average at least on our floor. And who knows, maybe we will be the loud ones? When playing Jazz or some other nice music? As a contra-program for our current neighbours we copied a nice selection of military march music from my parents and surprised them with that on a Sunday morning at a decent volume after they came home hungover the night before. They then woke us up for the first time at 2am with loud music accompanied by “singing” and then at 4amwith noises from a rather very private business… But who knows, maybe our current neighbours would love the march music selection and even ask us for a copy??