Today I found this great overview about the British English language via my network on LinkedIn. From my own experience of almost 5 years in London I cannot but agree.

So, read, smile and memorise – and maybe your next business negotiations with a British partner might go just your way… 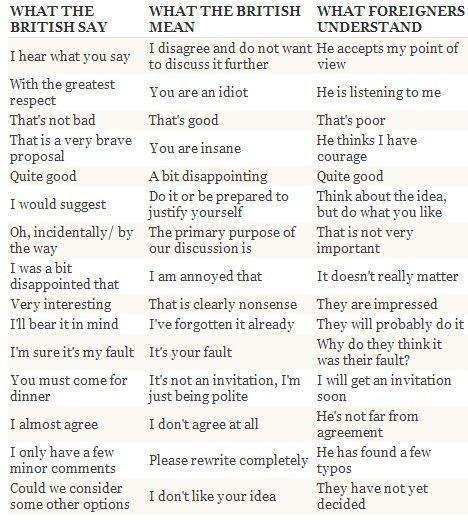 When to use du and Sie « Eintauchen. A very much recommended article by Dale Askey or @daskey.

If you ever wondered what to use when visiting Germany or meeting someone from Germany, the great overview that @daskey put together might help. Print it and put it over your desks, peeps!

Reality is, that even I as a native German sometimes struggle with this. Reason: rules are not as straight anymore! People in media for example tend to use often the “du” although they never met before. This happens especially when people are in the same age group. And personally I find that quite refreshing. I must admit that I am sometimes even a bit annoyed by the continuous “Sie” and “Du” decision making. Reason is “little me” having have been spoiled with simplicity in that respect for almost 7 years now. The Brits and the Swedes simply do not have that problem. It seems only ze Germanz and the Frenchies are putting themselves in these awkward situations requiring a decision for Du or Sie, Vous or Tu… Mindboggling sometimes, really.

Another thing I like about Dale is that he chose to spend some time at my old university of applied sciences 🙂 . Hope you have a great time, mate!

(P.S.: Even without knowing him, I would not hesitate saying “du” to Dale. But, hmmm, what if I was a student? Hmmm, it should be “Sie” then, shouldn’t it? Unless he invites me to say “du”. Well, and there we go again with all that “Schlamassel“.)

Whenever I see this sign I wonder what English speaking people might make of it. Especially considering the fact that almost everything could be given a double meaning in the UK … 😉

“Farthinder” is the Swedish word for “speed hump”… In case you wondered.

There is also this joke to tell. A Swedish guy visits his friend in the US and is really impressed by his car. “It must be nice to have a fart controller in the car” are his appreciative words.

And that’s as good as it gets.