With excitement we follow this year’s European Championship of ladies’ football which takes place in Sweden. One of the places the teams play is Norrköping, and so we went to see the second semi-final last Thursday. Norway played Denmark. It was a match with ups and downs, not at last due to the first goal being scored by Norway in the first five minutes, and the equalising one coming from Denmark during the last five minutes of regular match time.
So the match went into extra time.  Most of the audience appreciated that, however, somehow the security guards placed out around the arena did not seem to be overly impressed by the fact that they needed to spend at least half an hour more on their positions…
Anyway, since Denmark played stronger, it was fair enough. Norway won in the end on penalties. The otherwise catching-it-all Danish goalie definitely wasn’t at her best that night, which was a shame. The German Denmark fans who were sitting behind us during the match would certainly agree on that. Their “Denmark! Denmark! Goooo” is still ringing in my ears.

Anyway, after the match all the Norwegian players came to our corner where we sat. Their families were sitting there during the match, the other noisy group apart from the German Denmark fans. But oh how proud they were! Some pics from the event: 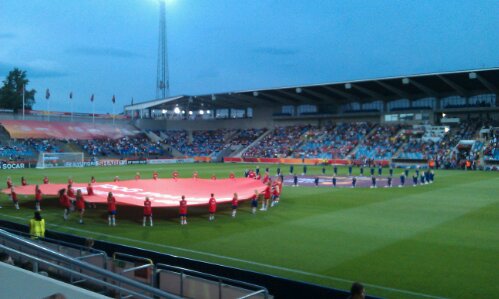 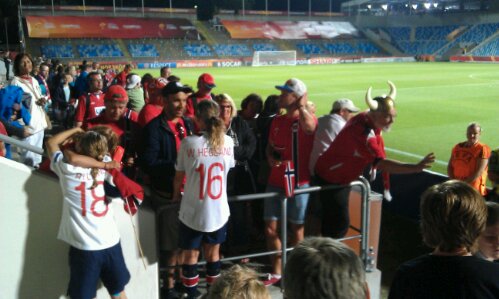 The text on his t-shirt says “real men watch women’s football!” So true! I was actually quite disappointed when I noticed how many of my otherwise footie-crazy German friends didn’t even seem to know that this tournament is taking place. Well, they might have noticed by now since the German ladies play Norway in the final in Stockholm tomorrow afternoon. My odds are on Norway, though!