I often get asked what NEXT is all about, why it might be good to attend. The simple answer is, one does not only discuss what’s happening now, but one gives an outlook of what might be happening within the next one to two years in the digital world.

The session “The Networked World” was probably one of the best examples to show us what can happen, and already starts happening in terms of connecting not only people, but also things to people, and even things to things. A Facebook for things if you like. Andy Hobsbawm from Evrythng explained to us how we could connect with our guitar, and the guitar with the world digitally in a way, that you would know which other things (and their beholders) are in close proximity, so that you could do a jam session together. Strange, but quite fascinating ideas when you think about it. Some use cases they explain here.

In the same session Alice Taylor from Makielab told us about how easy it nowadays is to produce your own customised toys locally with help of desktop 3D-printing, so that i.e. action dolls look like YOU want them to look, and not like any anonymous mass-produced pink Barbie. There was an example of a Zombie-doll btw, and I know that some of my Twingly-colleagues would love that one…

Anyway, I thought wouldn’t it be great to connect the technologies of Evrythng and Makielab?

And why connect only things of grown-up people? Wouldn’t it be cool to have an interactive world of your children’s toys and let them find new friends that way?  One could for example turn the dolls made by MakieLab into real personalities with real online identities. One could specify what the doll likes, what it cannot stand, like i.e. food, favourite games etc. and one could enable a GPS-like location finder, so that one can show others where the doll is. Whenever then a doll with similar interests is in the neighbourhood (and its beholder), one could notify the dolls with matching interest (and their beholders) and invite them to play. Would definitely work in kindergarden, on playgrounds with a lot of children, or maybe even in big towns and big warehouses with their places where children can play until they get picked up but usually don’t know a soul.

So if both, Makielab and Evrything get bigger during the next few years, then I’d suggest this as a business idea.

And otherwise one could imagine the same concept with just Evrythng and the possibility to give your favourite plush animal an online identity. Although my beloved would go mad if I would set up something like a facebook page for my plush turtle named Chips. My beloved always gets upset when I let Chips talk, and then he realises that he’s been talking to a plush turtle… 😉 However, I am so good at this, that he talks back to Chips almost every time, which makes it all the more fun to tease him… the man, not the turtle, that is… (and no, I don’t post any picture of the turtle since he otherwise would get far too self-conscious and thus a risk for its environment.)

There are loads of possibilities, and the Toy Story really only started, that much is clear! 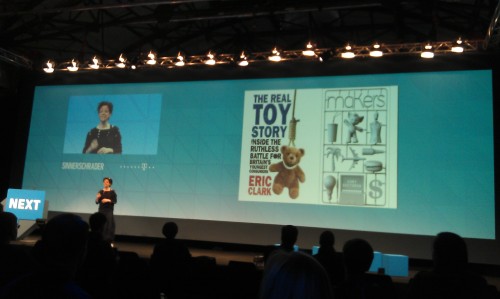